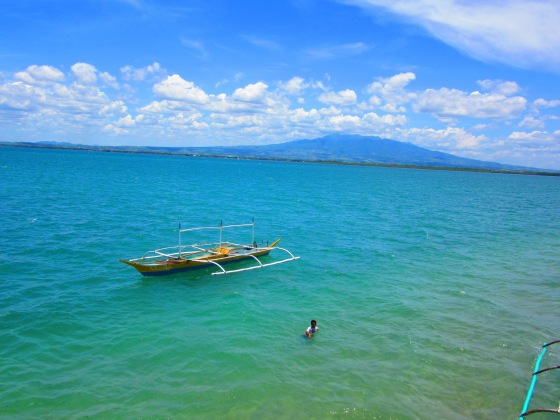 We rode this boat to get to Kabilang-bilangan Island. It took us approximately 20 minutes to get to the island. And when we got there, there was not a dry land in sight. This is sometimes called a Vanishing Island because when the tide is high, it completely covered in water. We climbed out of the boat then straight to the water. 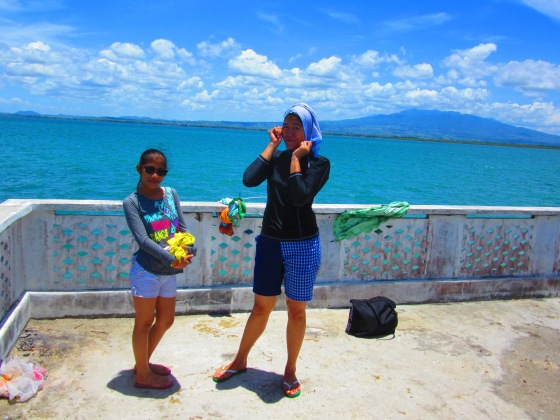 The island has only one structure, the watch tower. This is to monitor the fishing activities around the area. The tower, however, was partially damaged when Yolanda struck.

Since it is high tide, the sand just makes this faint appearance.

The other side of the island is also submerged in water. The island looks like a wispy galaxy on water because of the tapering ends. 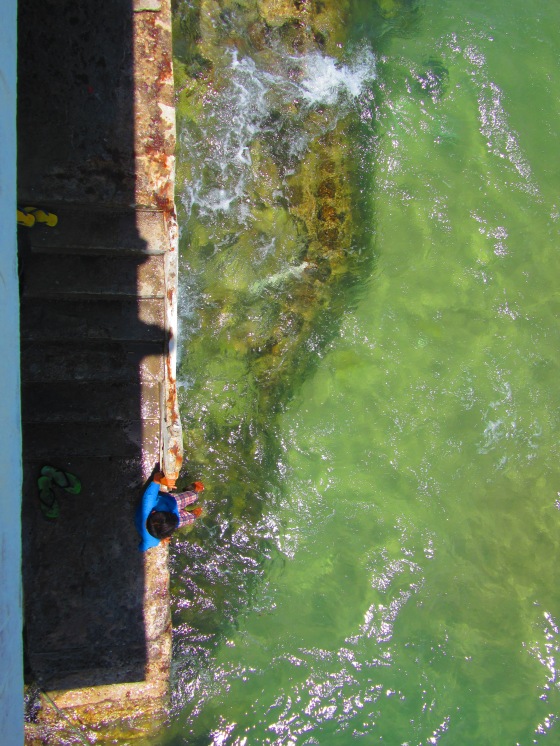 The steps leading down the tower once had some railings on it. Poor Yolanda, but most of what happened to the tower was blamed to her. =P

The view from the kitchen of the tower. Well what one will see during high tide would practically be just water. Everywhere. 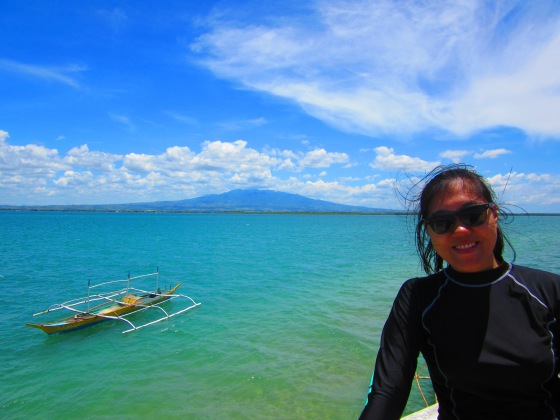 At the roofless veranda. The sea seems to extend to the foot of the mountain. 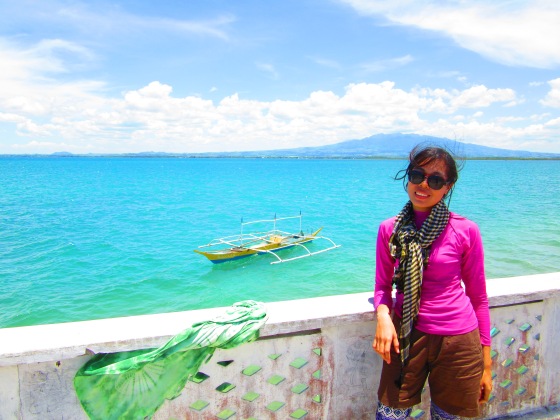 A slightly varied angle but still with the abundance of water. 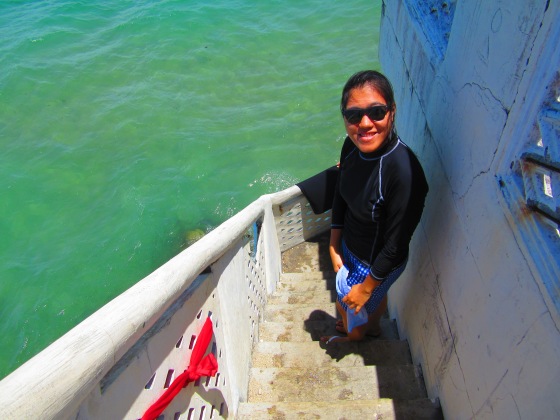 The tower has an upper floor where the veranda is located. This leads to the bottom half of the tower.

Got to be able to insert some of photography here. hehe. Just trying to capture the sea, sky, mountain, and boat.

No stores are present here. So when coming to this island, be sure to bring the essentials. Drinking water and food are very important since you won’t be able to find those in the island. It’s simply like a wisp of land with a watchtower that’s empty of any furniture.

While looking out the window, we can see these little fishes just swimming around the tower. There are a lot.

Insert another photography here. The wall, sky, and sea.

A part of the watch tower. It is said that this part moved away a little because of the storm Yolanda. When standing at the upper floor, you’ll see the gap between these two structures. 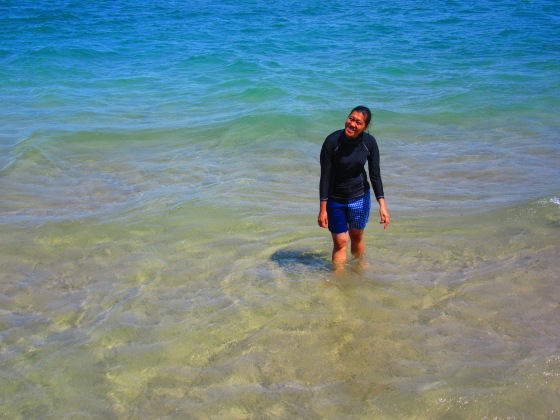 As the day goes on, the water level slowly decreased. The sand beneath is becoming more and more visible. 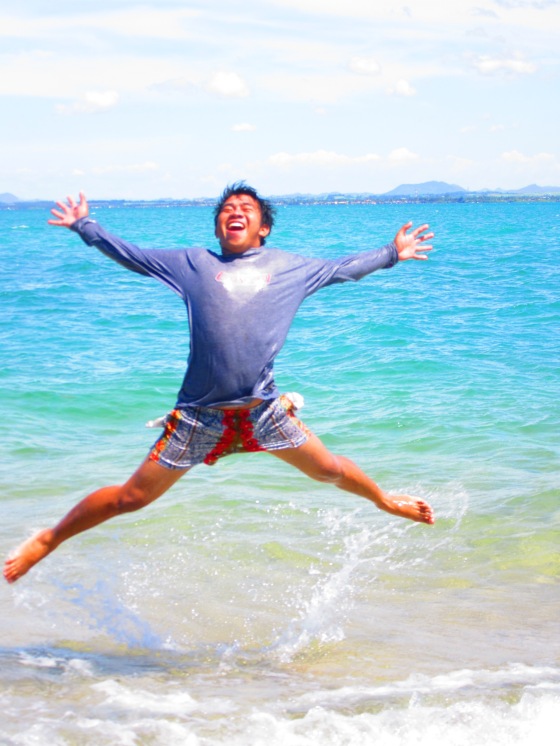 Jumping for joy because of the low tide! Nah. hehe. We are just trying out if we can still capture jumping shots. Turns out we still can. 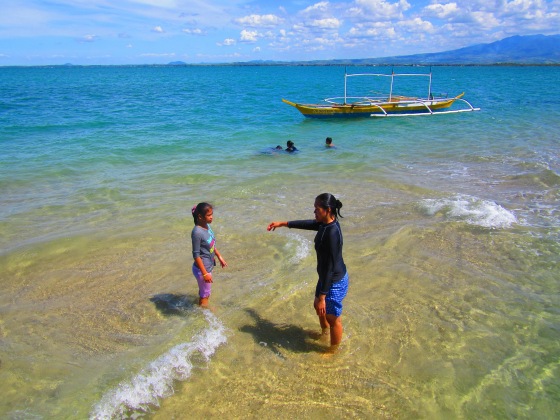 The water from hip level, to knee level, and now to ankle level. The water kept on decreasing.

I tried jumping too. I guess my legs really do not go up and down at the same time hehe.

The dry land slowly widens as the water level decreases. 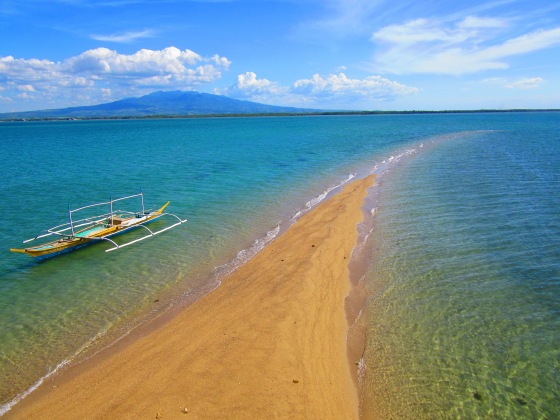 The other side of the island has dry land emerging as well. 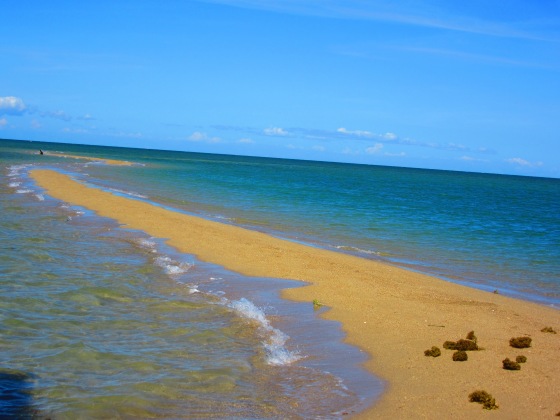 And the water continues to recede. Quite amazing to witness it actually. 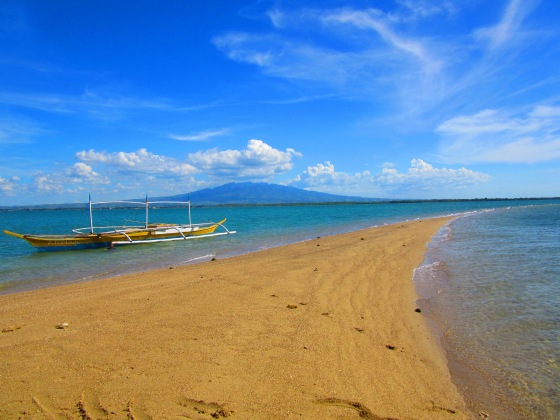 The boat is now close to the dry land. Footsteps can now be seen. 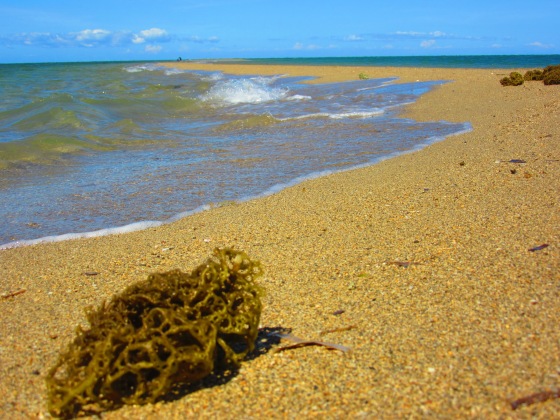 There are quite a number of these things on the water. They may sometimes startle you as they brush past your legs or feet.

Since there is no signage that tells where we are, we just wrote on the sand.

With this water level, we can safely hang out near the boat without worrying of the sudden change in depth. Before the ebb, the waves are quite strong enough to knock you down and you’ll find a hard time getting back up. Kind of dangerous, but if you’re just careful, it might just turn out as exciting.

There’s the whole of the tower. Right now the dry land is wide but you can still definitely reach both ends in just minutes. 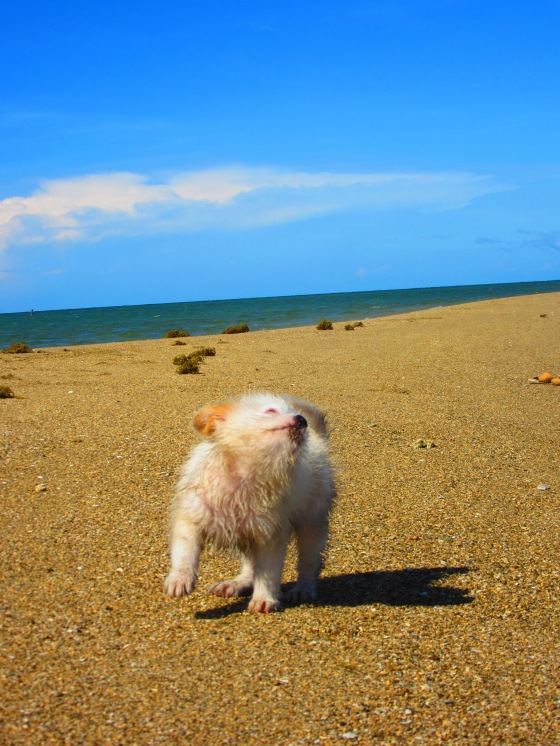 This fury friend went with us. Now that there is a wide dry land, she may be ale to run around.

It’s quite hard to take a still photo of Summer, (her name). But there are times when she’ll just sit for a couple of seconds, then start running again. 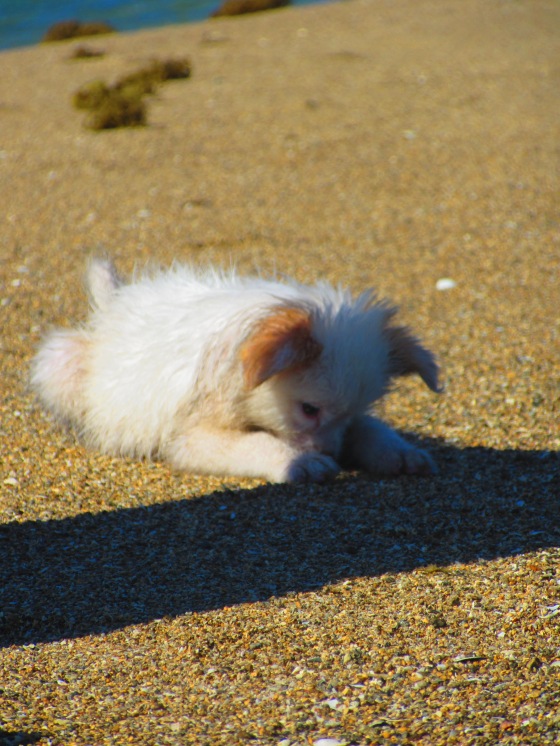 She seems to be enjoying the island as well. 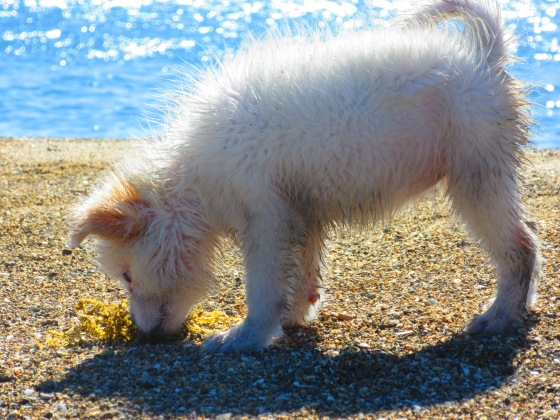 Curious summer wants to be familiar with almost everything.

In the act of looking around the place. 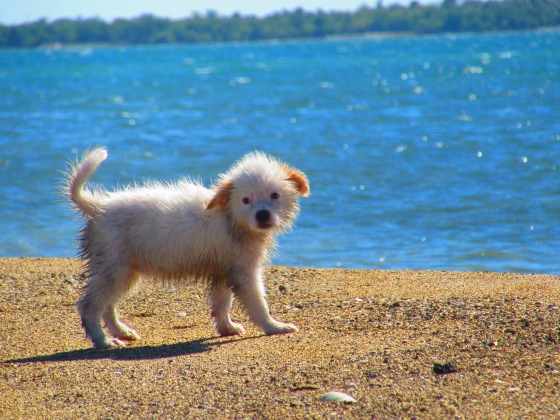 She must have noticed something interesting. 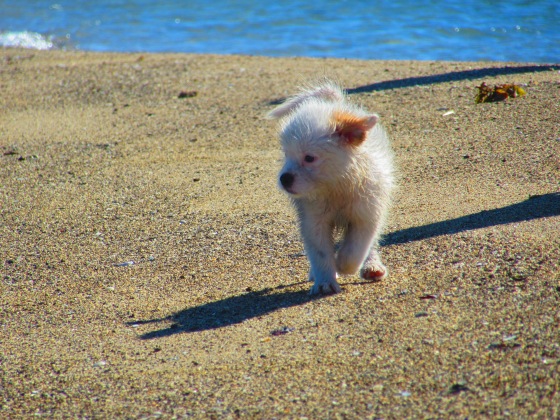 Then began running again. She’s full of energy coz during high tide, she was just up the upper floor, sleeping. Fully charged and with the water down, she runs around the island smelling and biting things.

One can now reach the end of the island without the fear of being knocked down by the wave. We are walking on the water coz Summer wants to play and she can sometimes play harsh. She doesn’t enjoy sea water yet though, so it’s our safe place to walk with her without being playfully bitten by her. hehe

Jumping attempts with the word “summer”!

The sun is still quite high up in the sky reflecting its light on the clear water of the island. 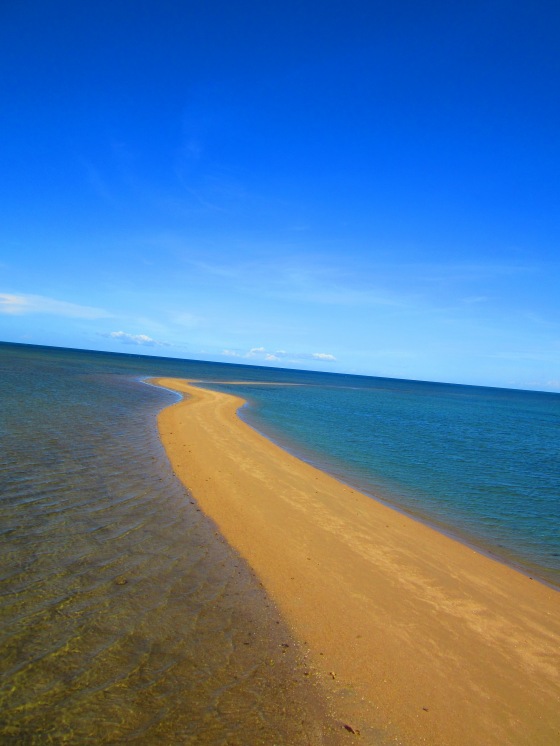 The land is more prominent now with the nearing of our departure. 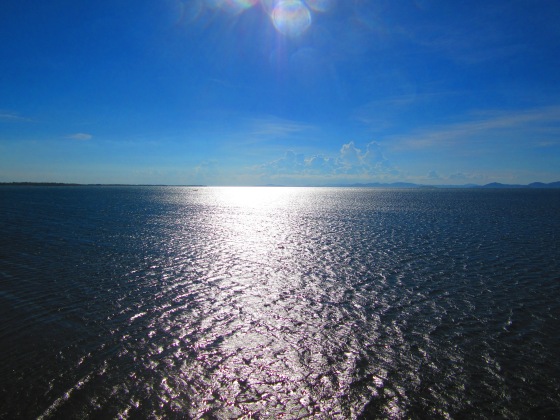 The sun reflected on the sea.

A last look at the island as we headed home. Coming and leaving the island is quite a thrill coz the waves could get big and sometimes spray some water on us. But this island, is one of the places you can go to and just be alone with yourself. Like literally be alone. Some even stay here overnight and just slept on a tent. Just be sure to have your sunblock and anything that can protect you from the sun ready since it can directly beat down on you since there’s not much shade on the island. Also, be careful of the deep water level on the island especially during high tide. All in all, you’ll surely enjoy the island for its uniqueness. =)